Another Day in Paradise

Yep.  I have been lax in the writing and posting thing.

Sometimes things just get away from me.

I have been jotting notes for the Nanowrimo coming up in November. Scribbling random ideas for other stories as the whoosh through my head.

Also working on that jacket I showed the first few pieces of in a prior post. It's coming along, just a few more finishing touches. 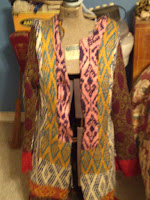 The pattern had me buy a carload of yarn. Much of which is left. So I will likely have mittens, a hat, and a scarf to match. And maybe a purse as well.

Last week was spent working on my car.  I was drafted to help the husband install front struts and wheel bearings.  It only took two and a half days to screw up the right side.  We will be attending to that this week.  The left side only took five hours.  We learned a lot on the first side. And remarkably have spent less than half of what it would have cost to have done.
If you don't count the four fingernails I destroyed in the learning.

I also had the opportunity to read an advance copy of a book from one of my favorite people. I will have more on that later. Though I can say I giggle-snorted through the whole thing.  WIN!

Will have more to show and tell later!