Not as Much of a Blubbering Mess

She graces the button of this blog. Cat, Herself, Mistress of All She Surveys. She will continue to do so. 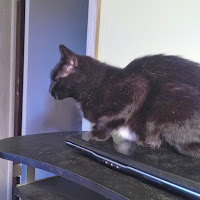 This was not the best week. As my Facebook and Twitter friends know, that final trip to the vet had to be made a couple days ago. It sucked.

Today I can remember her with smiles. She was a bitchy kitty. The other two cats that I share space with were constantly on guard. Had Herself had it her way, she'd have been an only cat. Only in her last days did she allow Sir to groom her. And then only for a minute before she growled and sent him on his way. 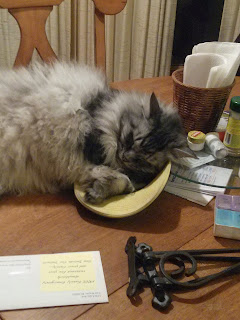 Little Wee was always waiting for the ambush that chased her from my lap, the table, pretty much any place that she was settled.  Lap sharing was not big on the Mistresses list of things to tolerate.

This is Wee and Sir. Wee is somewhat camera shy. 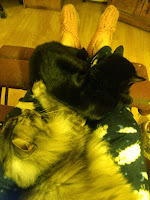 Ocassionally, there was a truce called, usually on chilly days when a lap was what the weatherman called for. 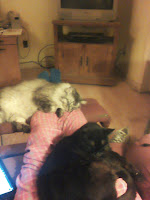 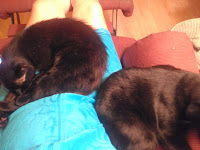 And Catnip parties were always a free for all. 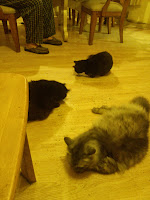 Though as a rule, she made it clear who was TopCat. 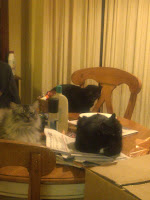 There is a dog also. She was very tolerant of Gizmo. Mostly just ignoring him. 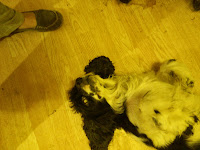 This morning Sir spent time luxuriating in my empty lap. That was good. Wee still awaits ambush, but she's beginning to relax some. Gizmo just knows something is wrong, in his dogly way he's trying figure out how to fix it. Mostly by barking at every imagined bump, thump, or breath someone takes.

There is still an empty space in the house. And empty spot where she would curl in my lap and demand her daily belly rub, head tucked into the crook of my arm.

As Sir and Wee get used to her absence, I have no doubt they will fill those spaces.


But, She will always be in my heart. 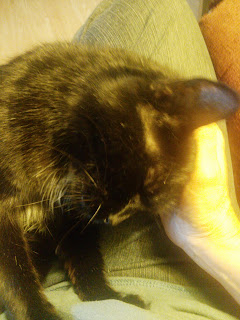